The Gifford Pinchot Task Force, rebranded to the Cascade Forest Conservancy, is a local nonprofit that protects the streams, forest, and wildlife in the Gifford Pinchot National Forest in Washington, including famous monuments like Mount St. Helens. The Task Force needed someone marketing and communications chops to boost their social media presence, create email newsletters, and design print collateral to increase memberships and donations, as well as audit website content for the rebrand. Working alongside the Executive Director, and program and membership staff, I increased the non-profit’s visibility to fulfill their goal of increasing funds and conservation awareness to protect the Cascades. 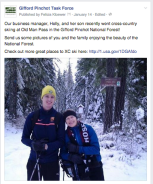 To promote the Task Force’s upcoming fundraising event, “Restoring Volcano Country” I launched a Facebook pay per click campaign, which allowed the Task Force to maintain a budget. In total, the ads ran for over a month before the event date.

I developed email marketing for action alert emails and newsletters, boosting the opening rate to 22.71% for October newsletter, 2014. In collaboration with the program staff, I developed an action alert email to encourage members to participate in a local meeting with the U.S. Forest Service. While many members are active in forest politics, we included sample talking points to prepare new as well as seasoned supporters on what points to advocate.

In order to achieve the highest return rate and maintain the budget, I researched cost-efficient printing and mailing services. In addition, the accountant and I analyzed member’s donations over approximately the last four years. Based on this data, I wrote up a proposal and presented it to the executive director.

• The appeal raised an average gift size of $109 per person

Previous Next
View All